Cookies help us deliver our services. By using our services, you agree to our use of cookies. More information

South Carolina in the Civil War 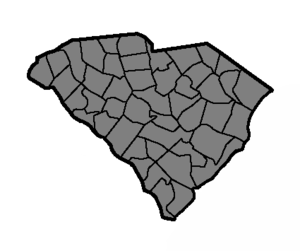 Click a county on the map above to visit the home page for that county. Note that this is a modern map and does not necessarily reflect the county borders at the time of the conflict.

The Nullification Crisis of 1832

South Carolina's rebellious ambitions began long before the outbreak of the Civil War. After the discovery of a conspiracy for a slave uprising, led by a freed slave named Denmark Vesey, the state legislature passed a Negro Seaman Act. This act prohibited northern (and foreign) black sailors from interacting with people in South Carolina ports. Supreme Court Justice William Johnson declared the law in violation of international treaties and unconstitutional besides, though his ruling was not enforced by the state.

In protest against federal tariff laws of 1828 and 1832 that favored the Northern economy, a South Carolina state convention passed the Ordinance of Nullification on November 24, 1832. This ordinance declared the tariff laws were unconstitutional, null, and not to be enforced within the sovereign State of South Carolina after February 1, 1833. The Nullification Crisis, as it came to be called, came to an end as quickly as it started.

President Andrew Jackson, a South Carolinian by birth, issued a Proclamation to the People of South Carolina condemning the convention's actions and calling on the people to resist the violation of the nation's constitution. At his urging, Congress enacted the "Force Bill" on March 2, 1833 to expand presidential power to enforce the collection of tariffs with the United States military. This threat of force, coupled with aggressive negotiation in Congress, forced the South Carolina convention to reconvene and repeal the Ordinance of Nullification on March 11. As a final act of defiance, the convention also voted to nullify the Force Bill in a "purely symbolic gesture."

After the Nullification Crisis, anti-abolitionist sentiment ran strong in South Carolina. In 1856, Democratic South Carolina congressman Preston Brooks entered the United States Senate chamber and beat Massachusetts Republican Senator Charles Sumner with a metal-tipped cane in retaliation for a speech he gave attacking slavery and insulting South Carolinians. Senator Sumner was beaten badly enough that the he was unable to serve for several months. Senator Brooks resigned his seat but received a hero's welcome on returning home, and was promptly re-elected to fill his own seat. Southern sympathizers and well-wishers sent him new canes.