Cookies help us deliver our services. By using our services, you agree to our use of cookies. More information

Missouri in the Civil War 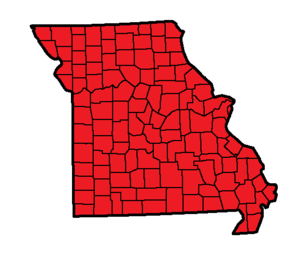 Click a county on the map above to visit the home page for that county. Note that this is a modern map and does not necessarily reflect the county borders at the time of the conflict.

Though Missouri never officially seceded from the Union, its position as a border state tested the allegiance of many of its citizens. Missouri was admitted to the Confederacy on August 19, 1861, and the remnants of the secessionist legislature voted the state in on October 31, 1861. Many troops from Missouri served in local militia units depending on which side controlled a particular area at any particular time.

Records for the Confederate Missouri State Guard are sketchy and do not provide much detail. The units appear to have been separated by division and assigned numerical designations within the divisions, rather than designated as an organizational whole. Because of this, the roman numeral designations within this body of troops distinguish between separate units that existed at the same time (i.e. the (I) 1st and (II) 1st State Guard cavalry units) as opposed to the roman numeral values that distinguish between chronological organizations of units on the rest of the WotRWiki (i.e. the (I) 2nd (U) and (II) 2nd (U) Missouri (Union) Infantry units).